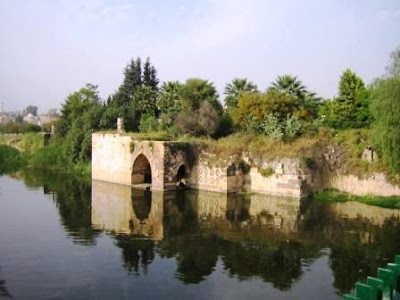 Just found this trove of pictures in my archives and never published them.
So here they are
http://album.syrie.be/Hama
Posted by annie at 1:11 AM

Story of my banishment

I had written all the details of my ban on my French speaking blog but Rime Allaf suggested I write the story in English. She wrote an introduction which you will find here

Here is my report :

"Six months ago, on October 27, 2007, in the bleak hours of the morning I was about to board a flight to Brussels at the Damascus international airport. I was leaving for a holiday, or so I thought.

I had cleared the emigration service and was about to proceed to the boarding area, when a policeman caught up with me, asked me the name of my father, and shortly thereafter came back and announced in a very neutral voice : you may leave but you’ll NEVER come back. “ABADAN ? What did I do? I’ll die !”

I phoned a friend thinking that my poor Arabic was responsible for misunderstanding this horrible news and the friend confirmed the sentence.

Upon arrival in Brussels, I went straight to the Syrian embassy and they told me they had no file about me, that my visa was valid and that it had not even been cancelled in Damascus. So, as far as they were concerned, I could go back. I wrote them a report about what happened and it was translated and sent to Damascus.

Back I went on January 9 after a friend with “wasta” had assured me that there was no obstacle to my return. I spent 20 hours in Damascus in the transit area of the airport before being shipped out. I was not allowed to see my friends or to leave them the presents I had brought with me.

A new Syrian consul arrived in Brussels and I went to see him. He asked me to write a letter. I wrote it in Arabic and he forwarded it to Damascus. He never got an answer. So, I applied for a new visa and I obtained it; nevertheless, according to other sources in Damascus, I am still blacklisted and not because I was part of an expelled shipment of University students who were mere listeners as I had thought so far. Where is the hitch?

Usually, when people are expelled, they are given time to pack. Not in my case. Fortunately, I had just paid 8 months of rent and my possessions were safe. My wonderful Syrian friends did all the sorting, disposing, packing and shipping of what I had accumulated during five years in books, records, clothes.

So, now I am in exile, pining for Damascus trying to rebuild a life elsewhere, but where? I cannot complain: I have a country and a house, things which most refugees are without.
Posted by annie at 10:31 PM

The Israeli Project Has Failed in Lebanon

This will be my last post for a while
From CounterPunch

Why the Bush Administration Wants to Negotiate Now with Hezbollah

Note: This is the second installment in Franklin Lamb’s extraordinary three-part series, which we are publishing across Thursday, Friday and the weekend. Editors.

"These fools do not learn from their past mistakes. When they withdrew from Lebanon, they continued to occupy the Shebaa Farms and kept our brothers in custody. Had they released them when they left Lebanon, there would not now be a 'prisoner issue' between Lebanon and the enemy. They opened the door for us."

Hassan Nasrallah, January 2004,during a welcome home ceremony for Lebanese and Arab detainees as a result of a Hezbollah-Israel swap.

DAMASCUS, Syria — Syria is scoffing at U.S. claims it was building a nuclear reactor at a site attacked by Israel warplanes seven months ago.

Ambassador Imad Mostapha also predicted that in the coming weeks the U.S. story about the site will "implode from within."

He said the photos the U.S. government made public are "ludicrous, laughable."

I love the caption of the second picture that to me looks like a barn but the caption of which reads: "This image shows an overhead view of a Syrian nuclear reactor that White House says bear a strong resemblance to one near Yongbyon in North Korea."
Posted by annie at 1:31 AM

I don't think any of the candidates is very desirable but he is probably the lesser evil.


The above is only the blurb.

"Occupied Minds is the story of two journalists, Jamal Dajani, a Palestinian-American, and David Michaelis, an Israeli citizen, who journey to Jerusalem, their mutual birthplace, to explore new solutions and offer unique insights into the divisive Israeli-Palestinian conflict. The film takes viewers on an emotional and intensely personal odyssey through the streets of one of the world’s most volatile regions."

For the full version see here only on April 24 and 26
Many parts I found enraging to watch as always when witnessing the Israeli abuses but these two journalists are honnest people and I agree with Dajani when he speaks of the one state solution with equality for all.
Posted by annie at 12:43 PM

If Americans Knew What Israel Is Doing! VIDEO WAS CENSORED!

"It is the goal of If Americans Knew to provide full and accurate information on this critical issue, and on our power -- and duty -- to bring a resolution." - IfAmericansKnew.org

The Israeli government's Foreign Ministry is involved in efforts to influence public opinion on the Internet. Israel's Foreign Ministry orders Internet propagandists, so called "trainee diplomats," to skew online polls and public forums to conform with the Israeli line.[sorry, broken link]
Posted by annie at 12:47 PM

A pro-Israel group's plan to rewrite history on Wikipedia 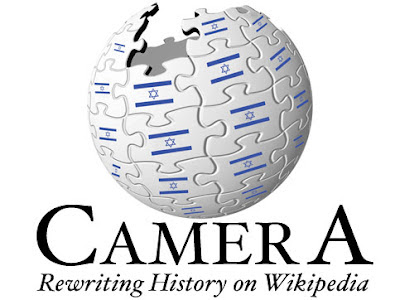 A pro-Israel pressure group is orchestrating a secret, long-term campaign to infiltrate the popular online encyclopedia Wikipedia to rewrite Palestinian history, pass off crude propaganda as fact, and take over Wikipedia administrative structures to ensure these changes go either undetected or unchallenged.

Not so cool facts about Israel

"NOT So Cool Facts About Israel
This is in response to a propaganda video I have seen called "Cool Facts About Israel", which is nothing but a bunch of B.S. Here are the real facts about the Zionist terror state. The truth they don't want you to see. (NOTE: This video has been changed slightly from the original version.)
A person filed a copyright violation against all people showing the original video on YouTube, claiming that ONE picture in the video was his. Let's suffice to say that had this been a pro zionist video condoning terrorism against the Palestinian people he would have had no problem with the use of "his" photo. In this version of the video that photo has been removed.
...
"Those who try to silence the truth only succeed in spreading it."

This video was referred by Josh Landis at syriacomment

The authorities in the illegal Jewish settlement of Beitar Illit, which is built on stolen Palestinian land, regularly open their sewage tanks on to the farmlands of the Palestinian village of Wadi Fuqeen, ruining crops, contaminating the water table and posing a serious health threat to villagers.


The Islamic Republic of Iran Broadcasting Corporation (IRIB) has begun a training course for war journalists, who will be sent to Syria and Lebanon in case these countries engage in war with Israel, the Iranian news agency 'A'sr Iran reported.

The course, titled "Training Reporters in Crisis," will be taken by 20 radio and TV reporters.

After graduating the course, the journalists will be placed on call and would be sent to Syria and Lebanon if war breaks out there.

Syrian President Bashar Al-Asad gave a speech on Wednesday, where he emphasized that while his country was preparing for war with Israel, he felt the odds for war were not high.

"We know that there are those in the American administration who want this war and so we are preparing for the worst," Al-Asad nevertheless added.

The Syrian president said further that the U.S. wanted a civil war in Lebanon and for there to be war between the Arabs and Iran.

For his part, Israeli Prime Minister Ehud Olmert has recently told the Israeli daily Yedioth Aharonot that Israeli and Syria were exchanging messages.

"I can assure you that with regard to the standing issues between us and the Syrians, they know what I want of them, and I know well what they want from us."

Copyright © 2008 The Media Line. All Rights Reserved.
You can read the article here
Posted by annie at 8:19 AM