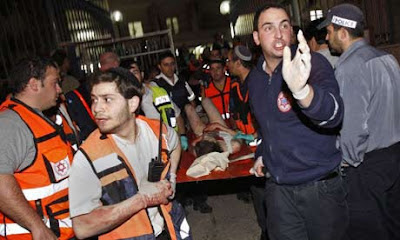 The descent into violence in the Middle East accelerated tonight as at least seven people were killed and dozens injured when gunmen opened fire into a crowd of students at one of Jerusalem's largest religious seminaries, the worst attack in the city for at least three years.

"The attack represents a dramatic escalation in the Israeli-Palestinian conflict."

You see, this is the type of biased news coverage and commentary that we have been attempting to highlight for several years. Over the past week Israeli forces murdered 120 Palestinians, half of whom were civilians and 20% children. Despite this, the mainstream media informs the world that only now, with a gunman killing 8 Israelis, has the conflict been "escalated".

We could hardly be more disgusted with what passes for objective news reporting in the world today.
Posted by annie at 5:41 AM